To encourage reconciliation and enhance mutual understanding and the spread and exchange of information about any aspect of Britain and Japan’s wartime encounter during the Second World War, and matters subsequently arising from it. We now would like to extend the same to Burma (Myanmar) and India and also any related nations involved with the Burma Campaign 1941-1945. We focus on balanced accounts of the Anglo-Japanese encounter 1941-1945, especially of the Burma Campaign.

About The Burma Campaign Society

From 1983, the late Masao Hirakubo OBE advocated reconciliation between British and Japanese soldiers who had previously been enemies. Veterans from both countries established the organisation (then Burma Campaign Fellowship Group) to achieve reconciliation based on mutual understanding by visiting each other’s countries and holding many meetings as well as joint memorial services in the UK, Japan, Burma, and India.

We nurture friendship by understanding the differences in culture, history, and tradition and continue to pass the veterans’ war stories on to younger generations.

We aim to provide opportunities for the international general public to access historical data, war memoirs of individual soldiers, diaries, photos, films, presentation of academics’ research by holding events, exhibitions, and discussion forums. We further aim to proactively participate in War Memorial Services in the UK, Japan, and India as well as in Burma, and broaden our knowledge. 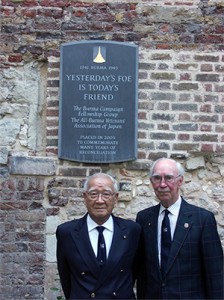 The founder of the Burma Campaign Society (BCS). He was one of the veterans of Burma Campaign and this experience led him to devote his latter life for reconciliation between UK and Japan. He has made tremendous efforts and he has accomplished numbers of honorable achievement.